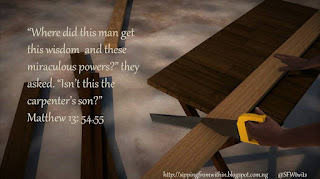 A preacher once gave an illustration of two friends, the first was struggling to make ends meet, while the second was a man who was respected in his field and had things going good for him, but whenever these two friends met each other in professional circles or in some social gathering, the first always pride himself when talking of the second by saying, “we’ve been buddies a long time, I know everything about him.” And to raise a few laughs, he’d say some loud remark, because he felt familiar with him. However, the people in such gatherings generally honoured the second. And though it seemed the comment of the first drew people to him, they only got to know him in order to connect with the second and move ahead, while the first remained where he was.
The first was caught in this fixed scenario because he could not see past the cloud of familiarity between himself and the second. And this situation is similar to that which weighed down on the people in Jesus’ hometown.

Coming to his hometown, he began teaching the people in their synagogue, and they were amazed. “Where did this man get this wisdom and these miraculous powers?” they asked. “Isn’t this the carpenter’s son? Isn’t his mother’s name Mary, and aren’t his brothers James, Joseph, Simon and Judas? Aren’t all his sisters with us? Where then did this man get all these things?” And they took offence at him. – Matthew 13: 54 - 57

I have been going though the book of Matthew again and I am so amazed at the great lengths to which Jesus went to reveal certain gifts and promises that concern us, and also show a unique model for us to live by as kingdom citizens. Yet, it is unfortunate that though these unique things have been revealed, some still stand at a distance ignoring the gifts offered and choose to grope around in the dark.

In his hometown Jesus taught things that amazed the people – meaning they acknowledged what he said, but familiarity caused them to take offence at him and miss out on an encounter with the power that could have blessed them. The message Jesus taught among these people was one that if preached in other towns would have gathered multitudes, and at such gatherings people who listened and believed would be blessed and have received their miracles, but in his home town Jesus did not do much, for the people lacked faith in him (Matthew 13: 58).

Sometimes the answers to the results we hope for are not as distant as perceived, but might be closer than we imagine. If only the people in Jesus’ hometown had looked past the cloud of familiarity made dense by their pride, they would have been blessed. The pride you hold on to that is denying you your blessing is a sign of immaturity. As you seek God, be sensitive for he can guide you in directions you never expect, and as you stretch, hold to heart that it doesn’t matter how close the person is to you or how young or old they are compared to you. It could be a family member or a close friend, nevertheless, if they produce results or have traits that glorify God and you desire; honour them and don’t allow pride deny you what could bless you in order to move you to higher level.

Honour the blessed around you who have results you believe God for.

Have a blessed week ahead.